What is the world coming to? The news media may tell you what is happening, but this book will tell you what is going to happen! The Great Controversy begins at the dawning of the Christian era, traces the rise and fall of nations and religious powers down to our day, then plunges ahead to preview the future. What this book see's coming is not based on guesswork, it is based on a source that has never been wrong and has never missed yet in it's prophecies.
Few people alive today realize that this earth is the primary battle zone of a cosmic war that erupted in the universe thousands of years ago. Fewer still know why the war is being fought and how it will end. But after reading this book, you'll be one of them!

The Great Controversy is the last in an exciting five part series covering the history of the whole world. Patriarchs and Prophets is the first, the second book is Prophets and Kings, the third is The Desire of Ages, fourth is The Acts of the Apostles and the last is The Great Controversy. Start with this book, then read the others. And remember, even though what you are about to read may astonish you and seem incredible, it is 100 percent nonfiction. Every word is true! 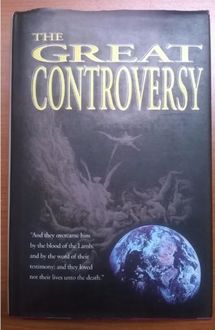 Moving out sale, ALL must go!

A Feast of Crows (Game of Thrown Saga)